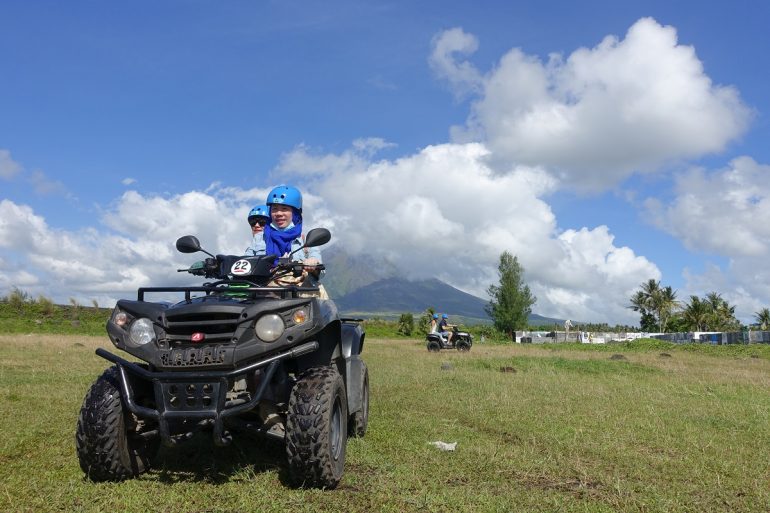 If Albay in the Philippines is growing into the island nation’s adventure capital, all credit goes to its signature attraction, Mayon Volcano. Mayon’s perfectly formed cone – rivaling that of Mount Fuji in Japan – can be seen throughout the Philippine province of Albay, and most of the fun to be had in the province takes place around or on the volcano’s slopes.

You don’t have to climb all the way to the summit to get the most out of your Mayon Volcano visit. Smart first-time visitors climb onto an all-terrain vehicle (available in abundance around Legazpi City) and head up to one of Mayon Volcano’s lava walls.

Getting there is three-fourths of the fun; the best trails take you across shallow streams, down tree-lined gulleys, and past sand quarries through rocky and muddy terrain until you reach your destination.

Beginner ATV riders can handle the “Basic Trail” riding from Barangay Pawa in Legazpi City to the edge of a solidified lava field created during Mayon Volcano’s 2006 eruption.

From the staging point to the “lava wall”, ATV riders traverse a nine-kilometer trail on Mayon’s southeast quadrant that climbs steadily until you reach the rest stop at the edge of the lava wall. The rest stop offers a change of routine: here you’ll park your ATV near a roofed pavilion, then hike up a short trail to the lava wall itself: a steep bouldered slope where you’ll scramble over irregular rocks till you reach a helipad facing Mayon.

The helipad was constructed within the 6-kilometer permanent exclusion zone, and is used to evacuate fleeing climbers in the event of a sudden eruption. From its elevation at about 240 meters above sea level, Legazpi City and Albay Gulf beyond it can easily be seen on a clear day.

Near the helipad, you can get hooked up to a zip line and get back to the ATV pavilion by zooming down a cable at breakneck speeds!

Getting Through the Mayon ATV Trail

The landscape from start to finish is varied and quite alive. From the staging area you’ll start down a paved road then down a dirt trail past a cemetery (where, presumably, some of Mayon Volcano’s past victims now lay to rest), then up past a concrete levee to the ATV trail proper.

The trail then criss-crosses a stream, then goes through a tree-lined path before you cross another road and get through a sand and rock quarry. Past the quarry, you’ll climb up a hill and find yourself within walking distance of the rest stop/pavilion facing the 2006 lava wall.

Most of this trail takes place within Bonga Gully, a rift that straddles the borders of four villages dangerously close to Mayon’s crater. In 1993, about 70 farmers living in the surrounding villages were killed by an avalanche of searing hot volcanic mud that tore down Bonga Gully and breakneck speed.

What You Need to Know about ATVing up Mayon Volcano

First, this isn’t the only ATV trail climbing up Mayon’s slopes, but it is the most popular. Many ATV providers around Legazpi City will offer you a range of routes, including a 45-minute ATV ride for beginners that simply tours the countryside surrounding the Cagsawa church ruins, and a longer ATV trail that terminates at the “Green Lava Wall”, a vegetation-covered lava field created during a 1960s eruption.

Second, you won’t need a special license to drive the ATV, but you’ll need to be a minimum age (about 12 years old) to ride, and you’ll also need to follow the rules. A guide will lead the expedition, and guests are expected to ride in single file all throughout: no overtaking is allowed!

While the guide expects strict compliance with the rules, he or she will also help out in chronicling the adventure – hand them your camera to get action shots of yourself splashing across the streams on your ATV!

Third, the trails are open to the sun, so sunblock and sunglasses are indispensable to the trip. You won’t need a hat, as helmets are required for ATV riders.

Fourth, get a well-known ATV provider. This writer rode with Your Brother Travel and Tours (mayonatvtour.com), which provides late-model ATVs in a variety of sizes and configurations. These guys count matinee idol Zac Efron as a happy customer!