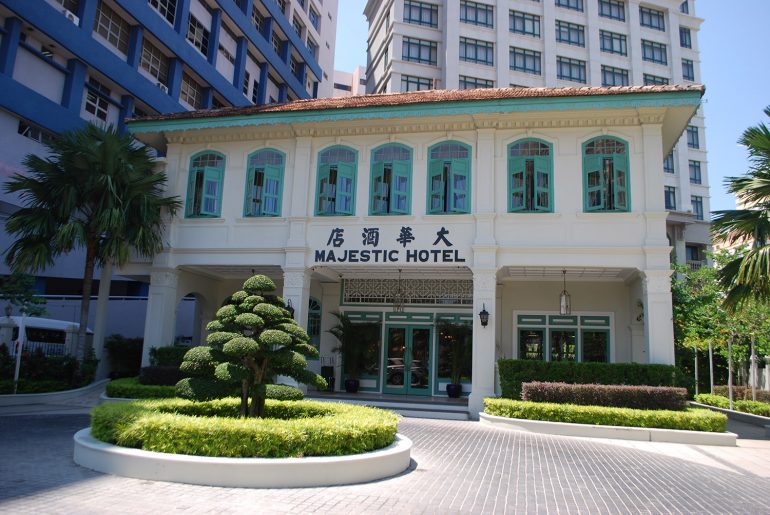 Towkay Roleplay at the Majestic Hotel in Malacca, Malaysia

Travelers to the Malaysia city of Malacca should thank their lucky stars that the former Leong family mansion was dealt the best possible odds. Had providence dealt differently, we would find nothing on this spot of any cultural value – just a parking building for the neighboring hospital.

The mansion now lives a charmed new life as the Majestic Hotel. From its location on the edge of Malacca’s Chinatown, the Majestic immerses its guests in the Malay-Chinese Peranakan culture, thanks to the mansion’s elegant 1920s interiors; a culinary menu straight out of a Nyonya‘s recipe book; and Malacca-grounded services like a Peranakan cooking class and Peranakan-inspired treatments in the Majestic’s attached Spa Village.

And if this taste of Malacca leaves the guest hankering for more, the Majestic obliges with a free daily tour of the city’s historic district – easy to do, as Malacca’s museums, places of worship, shopping streets, restaurants and all can be reached on foot in fifteen minutes.

Establishments like the Majestic Malacca help indulge travelers – like this writer – with a weakness for hotels with a history.

Their collective past as part of the British Straits Settlements in Southeast Asia have left colonial trading outposts like Penang, Singapore and Malacca with a surfeit of old buildings. Adaptive reuse has transformed a lucky few into hotels and hostels.

The adaptive reuse process keeps what made the place worthy of preservation in the first place. For the Majestic, it’s the lovingly-restored 1920s mansion and its authentic Straits Chinese fittings.

The Majestic’s exterior betrays equal measures of both Straits and Neo-Classical influence; inside, intricately-patterned porcelain tiles, teakwood countertops and leather upholstery allow the hotel to stay true to its affluent residential roots.

The Leong patriarch was a wealthy rubber planter, and the mansion’s trimmings let guests imagine what it may have been like to be a towkay (tycoon) of the time. This travel writer indulged that fantasy most acutely while lunching at the mansion’s library: a cozy living-room-like space with couches, low coffee tables and bookshelves. As with the rest of the mansion, the library’s walls, doors and window frames have been repainted to match their original white, teal and beige colors.

Guests do not actually stay within the Mansion; instead, a contemporary ten-storey building behind it houses the Majestic’s guestrooms and non-dining facilities.

This writer stayed at one of Majestic’s deluxe guestrooms on the ninth floor, a 35-square-meter space with a floor-to-ceiling window overlooking the Melaka River. The furnishings recap the Peranakan-infused majesty of the Mansion’s interior, with rich dark wooden furniture, faux-antique lamps, a plush chaise lounge next to the view, and a teak four-poster bed dominating the room.

A sizeable bathroom integrates seamlessly with the rest of the room, with wooden screens that slide shut for privacy. Black marble surfaces, retro plumbing and a clawfoot bathtubcomplete the throwback look; the latter is strategically placed so one can soak while watching TV.

During evening turn-down, the staff leaves a platter of nyonya kueh, or rice-flour-based pastry, with a different pair of kueh every night.

The kueh bedroom treat only scratches the surface of the Peranakan culinary world – if you want to dig deeper, the Majestic can indulge you, too.

The second storey of the Mansion was once the Leong family’s living quarters; it now houses a semi-formal dining space with seating for about 130 guests.

The mansion’s restaurant floor also serves dinner, though I was informed that most guests prefer to go out and explore Chinatown’s many culinary options in the evening. Not that the Majestic’s own dinner menu stints on the local flavors – the menu abounds with Peranakan favorites like pan-fried snapper assam pedas (fish, eggplant and okra in spicy-sour sauce), all served on vintage porcelain.

The downstairs Library serves lunch and afternoon tea – Peranakan comfort food for the former; a selection of teas, coffee and Peranakan kueh for the latter.

Finally, for guests who want to get elbows-deep into the Peranakan food experience, a cooking class called “the Peranakan Culinary Journey” can be arranged. This writer enjoyed learning the finer points of Peranakan cuisine with Chef Poh, who gamely took me through the steps of making ayam pongteh (braised Peranakan chicken with potatoes and mushrooms) and prawn pineapple curry.

The Majestic Peranakan experience extends far beyond the mansion’s four walls. The hotel’s tours of nearby Chinatown – a free service for Majestic guests – explain the background behind the 600-year-old trading port of Malacca, the stories behind its most beloved structures, and the peoples who created its unique culture.

Rahayu, the Majestic’s resident historian, begins our tour in the morning at the hotel driveway. She draws us a sketch of the hotel’s history as a family home – how the Leong family came into their money, built the mansion, and lost their fortunes after the elder Leong caught tuberculosis and died.

The tour proceeds down the river, across a “haunted” bridge, and straight into Chinatown’s narrow streets, where we visit the last vestiges of dying trades (the last sign-carving business in Malacca; the last shoemaker for bound feet; and so on) and significant places of worship.

Rahayu completes the tour at high noon – enough time to catch lunch and walk back to the hotel for some much-needed decompression. At the Majestic, this means a spa treatment at the YTL Spa Village on the residential wing’s ground floor.

The Majestic’s Spa Village takes its cue from traditional Malay and Peranakan treatments, in surroundings that recreate the Spa Village’s ethnic influences. The waiting area on the ground floor overlooks the hotel swimming pool, with daybeds permitting spa guests a quiet moment between treatments.

Most treatments begin with a hair washing ritual that involves both a natural shampoo, oil, and vigorous scalp massages throughout. As the hair wash proceeds, the spa guest can view P. Ramlee movies on an LCD screen in the ceiling. The treatment proper then continues in one of the six spa suites upstairs; this writer had the privilege of enjoying a “Nutmeg-Rice Rolling Massage” that purportedly reduces aches in the muscles and joints.

All considered, the Spa Village and the Majestic’s other immersive Peranakan-flavored experiences couldn’t have made me feel more a part of the local culture if I had been a scion of the late Leong patriarch himself.

The Majestic Hotel, Malacca at a Glance

Amenities: WiFi access in all rooms. Swimming pool, gym. F&B outlets: dining room, library, and bar at the Mansion. Spa Village at the residential wing offers a menu of Peranakan-inspired massage therapies, beauty services and body treatments. Four conference rooms amounting to a total of 155 square meters of conference space. Services include a complimentary tour of Chinatown from 10:30am to 1pm, and a Peranakan cooking class held at the space between the residential wing and the mansion.