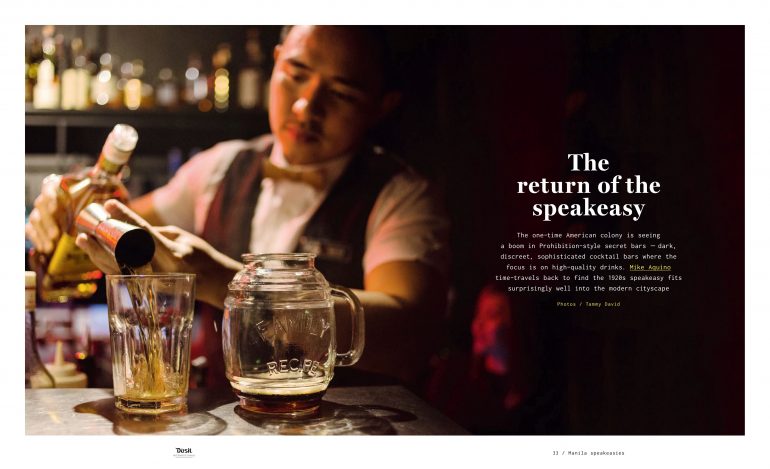 Return of the Speakeasy.

During the Philippines’ stint as a U.S. colony between 1898 and 1945, the locals adopted much of American culture without question – but stopped short of adopting Prohibition the 1920s. Filipinos ate cheeseburgers and donned zoot suits with the best of them, but continued to drink legally through the dry years.

It’s surprising and somewhat ironic to find hard-drinking Filipinos looking back to the roaring 20s with nostalgia: beginning with Blind Pig in 2011, speakeasies have carved a discreet niche in Manila’s nightlife. Absent an actual historical precedent, Filipinos have instead turned to the speakeasy concept to meet a growing demand for exclusivity and discretion.

Local speakeasies avoid overt self-promotion, relying on word-of-mouth to attract a discerning complement of regulars. “Because you have to find it, there’s a sense of exclusivity and mystery,” explains Gene Tiongco, a plastic surgeon and avid speakeasy patron. “And the drinks are crafted – the bartenders know their drinks and take their time putting them together.”

They may be pricier and quieter than your average watering hole, but Manila speakeasies offer added cachet that Filipinos are willing to pay extra for. “You’re not just buying excellent drinks,” Gene says. “You’re buying privacy, your chill and relaxed moments.”

The Blind Pig is the grandaddy of Manila’s speakeasies, though it’s only a meager four years old. The sorely-missed New York joint Milk & Honey provided both inspiration and instruction, sending its top mixologist Mickey McIlroy to train Blind Pig’s barkeeps.

Before you can get to Blind Pig’s mint juleps and Smokey Old Bastards, you’ll need to get past the door, if you can find it. The only clue to its location is a raised brass sign rendered in Braille. Entry isn’t guaranteed; the compact interior seats about 45, and they’ll turn away the excess.

The low-lit, intimate interiors recall actual speakeasies of the 1920s; brick walls, muted candlelight and pewter finishes hearken back to those freewheeling times “when alcohol was prohibited and people had to be careful when enjoying their libations,” Blind Pig barkeep Joey Cerdinia tells us. “We try to honor the speakeasy concept as much as possible.”

“Roaring” the Blind Pig is not: regulars must follow house rules like “mind their manners and those of their guests” and “keep drinks, tempers, and voices down”. This frees patrons to enjoy mutual company and the cocktails to the hilt. Ask for a “Bartender’s Choice” and Joey will whip something up based on your personal attributes.

If you’re less about the jazz and more about the rock and roll, head to Finders Keepers for a speakeasy that speaks your language. But first you’ll have to hunt it down: turn into a side street off Pasong Tamo (just south of the Makati central business district) and look for Joe’s Meat Shack in a recycled shipping container. A nondescript door in the building behind Joe’s takes you into Finders Keepers, its name emblazoned in neon above the long bar.

Finders Keepers seats about thirty in an industrial-meets-your-grandmother’s-parlor interior; the long bar offers the best seats in the house, where you can chat with the barkeep or with new friends over a 70s funk, hip-hop and indie rock playlist.

Like Blind Pig, Finders Keepers presumes to impose house rules upon its guests, but they have the effect of enhancing in-house camaraderie: “offer a seat and make a friend” is immediately followed by “for f—‘s sake NO SMOKING”. The black-shirted bouncers make sure guests stick to the rules, but they’re friendly fellows otherwise.

Al Capone himself might feel right at home in ABV’s throwback digs, its dim incandescent bulbs overhead casting an amber glow over the cane chairs, mirrored walls and black-and-white checkered floors. Period jazz plays over the speakers; the nattily-dressed bartenders proffer a cocktail list that combines classic drinks like the Sazerac with in-house creations like the Señorita Marquesa and Jupiter Street.

Every Narnia needs a wardrobe, and for ABV, it’s a telephone booth inside a burger joint at 22 Jupiter Street’s basement. An out-of-the-way button activates the electric lock; the door swings outward, and suddenly you’ve moved from a vaguely 1950s diner setting into ABV’s Prohibition-era vibe.

The bartenders are consummate cocktail fanatics, and it shows: barkeep Kenneth Bandivas made the world finals of Diageo Reserve’s Bartender of the World competition, and the bar runs a popular Master Class mixology program that accepts F&B professionals and drinks enthusiasts alike.

This hidden gem in Salcedo Village is Blind Pig’s less exclusive little brother, but don’t let that put you off. “The Exit’s philosophy is to keep things simple,” Joey Cerdinia explains. “We don’t try to be fancy – we enjoy serving great beer, solid cocktails, fantastic yet familiar bar food, and classic rock.”

To get in, look for the Corinthian Plaza’s ground-floor cafe, and head for the door marked with an “Exit” sign near the cafe’s foyer. Punters make a jarring transition from a well-lit casual diner to a shadowy Art-Deco-inspired watering hole: the only illumination in the room comes from the back-lit long bar.

Unlike other speakeasies, the Exit bar makes beer drinkers feel at home with an eclectic selection that includes Amstel, Hitachino, Kronenbourg 1664 and Stella Artois. Exit Bar’s cocktail list favors simpler, more straightforward mixes, made (and priced) for patrons just dipping their toes into the possibilities.

Signature Drink: De Rigueur favors the Filipino penchant for sweet and fruity drinks that pack a kick: a blend of bourbon, grapefruit juice, and honey. PHP200 (US4.23).

You approach this speakeasy by stages: you first enter Bugsy’s in Salcedo Village, then head into the enclosed smoking area. Sit at the long bar and wait for the cryptic question to be put to you – “would you like to try the Red Rabbit?”

Having gotten to “Yes”, the bartender swings a wall open: you’ll walk into a black-walled private room with stark white moulding, colorful chalk handwriting on the walls describing the cocktails and food on hand. Despite the stark modernistic décor, the vibe is decidedly casual, as befits the Boracay provenance of the bartenders and its head mixologist Anthony White.

The 7-Eleven convenience store at RCBC Bank’s headquarters in Bonifacio Global City harbors a secret in its storeroom. Walk past the stacks of instant noodles through a swinging wall to access the absurdly spacious hidden bar immediately adjacent. The effect is not unlike stepping into a police call box to find Doctor Who’s TARDIS.

Bank Bar’s interior blends industrial design with a touch of the post-apocalyptic. Vaults on the wall opposite the bar frame a reproduction of a Banksy artwork found in Queens, New York. At the far end of the hall, a low glass-walled room accommodates smokers.

The bar, naturally, boasts the best seats in the house. The establishment’s bartenders love indulging in theatrics, whether by wearing bulletproof vests on top of their uniforms, or producing miniature fireworks as they sprinkle cinnamon powder onto a flaming beverage.

Curator’s proprietors have a passion for both coffee and cocktails, and the cozy living-room-like space within Cyrano Wine Bar ably accommodates both. Baristas hold the fort in the daytime, serving espressos and cold-pressed juices. At 7pm, the bartenders’ shift kicks in.

Even with dimmed lights, Curator’s interior feels homey and lived-in: bare concrete walls bear playful cartoony artwork, video-game-inspired sticker visuals and odes to both coffee and alcohol. Make your way to the wooden-topped bar to peruse the drinks list, an eclectic selection that shows off the bartender team’s creativity. If none of the drinks strikes your fancy, the bartender on duty will be happy to make you a customized cocktail depending on your preferences.

Signature drink: the bartenders decline to name a number-one among their picks, but Vida is as good a place as any to start. Curator barkeep Poch Ancheta combined Bulleit bourbon, Suze, Aperol, Fernet-Branca, Solerno liqueur, and chocolate bitters to produce a heady drink that hits like a Whitney Houston torch song: “loud and bittersweet”. PHP495 (US$10.46).