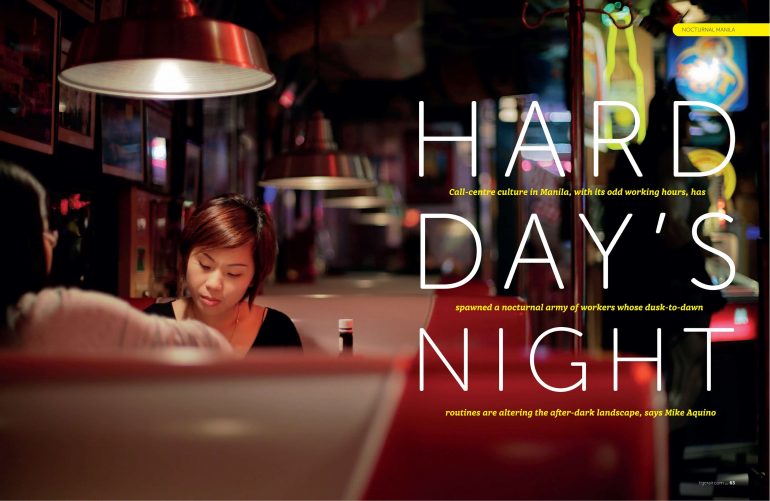 As the sun sets over Manila’s Eastwood City business district, Jen Osorio’s day is just getting under way. It’s 6pm and the 23-year-old Filipina’s shift at the call centre doesn’t start for another hour. As is her habit, she heads to Rufo’s on Eastwood Citywalk for a breakfast of coffee and tapsilog (fried pork, fried egg and garlic rice).

Eastwood Citywalk is an open-air semicircle of retail outlets, bars and restaurants that marks the heart of the Eastwood City district. It’s a magnet for those in Jen’s line of work. “You can tell who the call-centre agents are from the clothes,” Jen says between mouthfuls of tapsilog. “Unlike everyone else, we wear jackets and cardigans no matter how humid it is outside because the operations floor is really, really cold.”

Just 20 years ago, there was no Citywalk, no high-rises, no Eastwood City. Manila’s major corporations were safely ensconced in the Makati financial district to the south; what is now the 17ha Eastwood development was barren grassland in the 1990s.

If parts of the Philippines’ capital are all but unrecognisable from 20 years ago, give the boom in business-process outsourcing (BPO) some credit for the extreme makeover. It has altered the landscape and changed the way the city eats, works and goes out.

In the 1990s, American businesses started shifting certain labour-intensive operations to countries where these could be executed remotely and cheaply. The Philippines took advantage.

Once a colony of the US and still an avid consumer of American culture, the Philippines possessed a ready working force of Englishspeaking, McDonalds-munching college-age youths, at least 800,000 of whom now work for the country’s many BPO companies.

While the rest of the Philippines sleeps, this insomniac army performs a range of business operations for clients they never see: everything from medical transcriptions to tech support.

Last year, the outsourcing industry brought the Philippines about US$16 billion in revenues. This windfall pays for the upkeep and recreation of a young working population willing to trade ungodly hours for the promise of a fatter-than-usual paycheque.

Says Vanessa Zambale, a human resources expert for the BPO industry: “Call-centre agents are paid more than average, especially if it’s a multinational call centre. Foreign-led call-centre workers have a starting salary of around PHP16,000 (S$450) a month before taxes.” That’s significantly more that the USS$220 (S$280) a month that comparable office workers make in the Philippines.

Without BPO money, Eastwood City and fellow upstart corporate colonies like Bonifacio Global City, Ortigas Center and Northgate Alabang wouldn’t exist. Each has developed from scratch into a self-contained mini-city with its own complement of late-night restaurants, shops and entertainment venues, all within easy walking distance. BPO agents like Jen have no need to venture beyond their respective enclaves.

The growing ranks of young nocturnal professionals with money to burn have altered Manila’s circadian rhythms.

At 11pm, Jen and her fellow graveyard shif ers head out for their lunch break. The call-centre diet tends to be greasy and cheap, catering for workers needing plenty of energy to power through the night. Eastwood’s fast food places – McDonalds, KFC and the Filipino chain Jollibee – stay open around the clock now.

But many other services have profited from the late-night surge in business. In Eastwood, the Big Apple Express Spa stays open until midnight to work out the kinks in call-centre agents’ shoulders. Health and wellness outlets are among the biggest beneficiaries of the BPO bull market – in Eastwood, trendy agents sweat out their frustrations at Bikram Yoga or stop by Fitness First for a brisk dawn workout.

Of Manila’s many business enclaves, Eastwood City seems to be the most grateful for the BPO revolution. A statue in the main piazza behind Eastwood Mall honours the collective call-centre workforce: three heroic, faceless, headset-clad figures stand ever-ready to field calls.

The Fort is Manila’s much-hoped-for future in action, and establishments like Bonifacio Global City’s Recovery Food keep their doors open day and night. The menu features traditional Filipino fare with a twist, which goes over well with call-centre agents hankering for a soul-nourishing breakfast in the dead of night, such as the “tapa de morning” combination of fried beef, salad, fried egg and garlic fried rice.

The late-night food scene expands further on weekends with the arrival of Midnight Mercato, the Fort’s only weekend night market. Inspired by Europe’s central markets and America’s food trucks, Midnight Mercato serves up hot street food and fresh farm goods. Midnight Mercato is open on Friday and Saturday nights from 10pm to 3am.

Nearby, the venerable Makati financial centre has followed the money, attracting a vigorous BPO workforce of its own. New call centres have sprouted up in Makati’s Salcedo Village, its denizens gentrifying a long-time nightlife district. Drunken expats and their mini-skirted Filipina companions no longer have the run of Jupiter Street; this restaurant row north of Salcedo is now filled with call-centre workers decompressing over beer and Korean food. Jupiter is home to a raucous selection of bars, karaoke joints and ethnic restaurants that stay open into the wee hours. Call-centre workers congregate at Top Grill or Whistlestop Restaurant and Bar. Even karaoke bars have extended their hours for the call-centre crowd – last call at Jupiter’s CenterStage is at 4am on weekdays.

The BPO workforce’s legendary looseness with their dough can be attributed to a simple fact of life for call-centre agents: they play hard because they work even harder. “We’re in this for the money,” Jen says. “So at the end of the day, why not eat at nice places for a change? Why not buy nice things?”

The need to compensate has driven consumer spending in Manila through the roof among the 18-25 age group. Call-centre workers jostle for the latest-model mobile phones (“gadgets are like medals to show that we’ve made it,” Jen says) and savvy real estate and car marketers increasingly aim their pitches at BPO employees looking to move up in the world.

But Filipino family ties run deep, even in the BPO age. In a country with an unstable social safety net, many call-centre agents still earmark a large portion of their salaries for their families. Which brings us back to Jen: when her shift ends at 4am, she declines an invitation from her graveyard-shift compatriots to meet at popular night spot The Distillery – she’s heading home for a good day’s sleep.