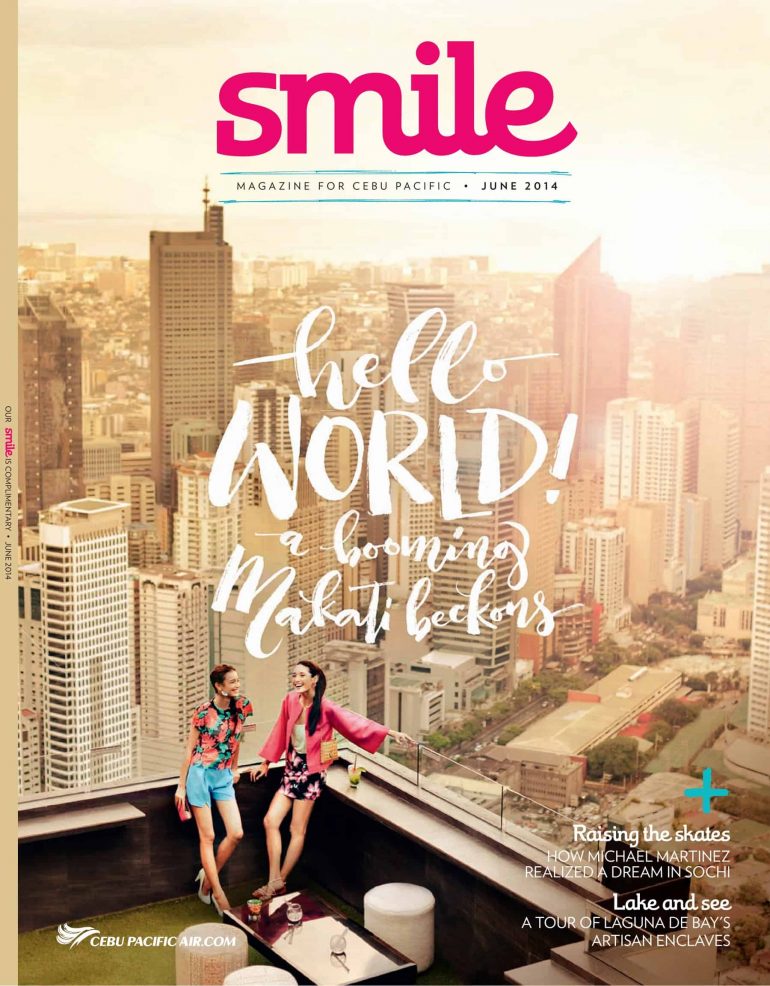 At eye level, beyond the plate-glass windows, I can only see the thicket of glass and concrete that makes up the CBD skyline. Carmela “Mel” Ignacio, Associate Vice President of Ayala Land’s Strategic Landbank Management Group (SLMG), is sharing information about the city’s pedestrian underpasses. Or art galleries. Which, in Makati, tend to be one and the same thing.

Consider the 700-meter-long Dela Rosa elevated walkway that connects the Greenbelt shopping precinct with the far western fringe of Legazpi Village. Tiny restaurants and shops line the northern side of the walk, while tasteful artwork covers the ceiling.

“You can stop anytime [to eat or shop], it’s well-lighted, and we’ve painted the ceiling with murals,” explains . “We want the pedestrian experience to be very pleasant.”

The Makati Commercial Estate Association (MACEA) is currently working with Ayala Land to extend the Dela Rosa walkway by the third quarter of 2014, Mel tells us. “It now ends at Rufino Street; they will extend it to Salcedo Village,” explains Mel. “Eventually, the objective is to connect it to cross Buendia, connecting developments west of Ayala. Connectivity is a very important component for the city.”

A Tale of Two Districts

Makati north of Buendia consists of Poblacion district, and with it, Jupiter’s ethnic restaurants and Burgos’s beer joints. This part of Makati shared little of the CBD’s aspirational character until fairly recently.

But now that Makati’s development is reaching across Buendia Avenue, there’s a sense that the distinction between the two areas is steadily blurring. The Gramercy Residences tower – currently the tallest building in the Philippines – casts a shadow over Poblacion, its plush apartments crowned by the even plusher 71 Gramercy lounge bar up on top. Across the Buendia divide, Salcedo and Legazpi villages now host a plethora of new bars, dining outlets and street experiences that have all the adventurous energy of their northern counterparts.

Just a little past the Legazpi Village terminus of the Dela Rosa Walkway stands Esteban Street, a tree-lined lane runs down the middle of a canyon of low office buildings. Your Local, a hip, industrial-style restaurant, and its next-door neighbor Yardstick Coffee, stand on one side. Your Local is partly hidden from sight, while Yardstick commands a fuller view of the street.

“Your Local is really your local restaurant, your local hangout,” explains Jenny Yrasuegui, one of the partners at the helm of Your Local – the other two being the chefs, Nicco Santos and Denny Antonino. Nicco and Denny cook up dishes inspired by their travels throughout the region – the beef rendang takes cues from Singapore, the hometown of Nicco’s wife.

Next door, Yardstick’s spartan interiors double as showrooms for La Marzocco and Rocket Espresso’s coffee machines, and as test labs for the coffee blends imported by Yardstick from across the world. “For people to want to use the coffee or to buy the machines, I think they need the space to experience it for themselves,” says proprietor Andre Chanco.

Both Andre and Jenny feel right at home in Legazpi Village, albeit for different reasons. Andre was drawn to this part of Makati by its diversity – “We have Jolli-Jeeps [food trucks], banks, 7-Elevens – there are not a lot of streets with trees left, I think Esteban is one of them that retains that,” says Andre. Jenny, on the other hand, loves the changing culinary landscape.

“Makati is very fast-paced, with a lot of restaurants open around the area,” explains Jenny. “It wasn’t like before, when you used to choose between two bars, or one pub. [More people are] ready to learn more outside their comfort zone.”

“Filipinos love quality,” Aljor confides. “It’s just a matter of making it available so that they don’t have to go all the way to Mexico, the US or Australia to have it. You can just go to Makati!”

Aljor thinks of Makati as an ideal proving ground for unfamiliar culinary concepts like A’Toda Madre. “You get a whole different kind of people here in Makati, a universal crowd,” he says. “You have your locals, you have your expats, you have your transients who are doing business here – you can pretty much create something and try it out with different communities.”

Poblacion reminds Aljor of certain bohemian quarters elsewhere in the world – the local vibe recalls “the kind you get in New York in the Meat Market district or the South of Market in San Francisco,” he recalls. “It’s very international – any given day you can just sit out here and hear 10 languages being spoken by people walking by.”

Unlike genteel Legazpi Village, Poblacion lacks the sophistication of the CBD – and the neighborhood makes no apologies. “We’re near the red-light district [on Burgos Street],” explains Maica La’O, co-proprietor of MNL Boutique Hostel, a backpacker establishment next to A. Venue Mall off Makati Avenue.

MNL benefits from increased interest in the Philippines by travelers from Europe and Australia – and the hostel’s location in Makati has helped seal the deal. “[Our backpackers say] they prefer to stay in Makati because it’s more modern, and you can just walk everywhere – everything’s convenient,” Maica tells us. Tourists now pay no heed to the north-south divide – Makati’s efficient transportation, wide sidewalks and convenient pedestrian underpasses allow visitors staying on the Poblacion side to cross over to the CBD’s upscale attractions with ease.

One jeep ride from A. Venue Mall down Makati Avenue and bam! Guests can find themselves in Ayala Triangle Park, linked by underpass to everything else in the CBD by Makati’s massive pedestrian infrastructure – the biggest in the Philippines.

If enjoying a coffee al fresco at Banapple in Ayala Triangle Gardens doesn’t do it for them, a few hours viewing authentic pre-Hispanic gold artifacts at the Ayala Museum just might. While in the area, they can jog at Legazpi Active Park in the early morning; shopping therapy at Greenbelt for the rest of the day after that.

None of this came about by chance. Hard behind-the-scenes work by stakeholders like the Makati City Hall, MACEA, SM and Ayala Land, among others, has helped create a metropolis that balances development and spontaneity in a way few other Philippine cities can match.

That commitment to balance will soon be tested again on a major new development west of Legazpi Village, where Ayala Land launched its newest mixed-use entertainment district, Circuit Makati, at the site of the former Santa Ana Race Track.

“The Circuit covers 21 hectares right next to Pasig River,” Mel tells us. “We are developing three entertainment venues – the Globe Circuit Events Grounds, where we have outdoor concerts; a 300-seater Black Box for smaller concerts; and by January 2017, we will have a 1,500-seater performing arts theater.” Circuit will also have three sports facilities, retail and office spaces, residential units and a hotel.

In short, the Makati we enjoy today might just be a first act. As Mel shares, Ayala Land will “keep on working with other stakeholders to make sure that Makati will continue to evolve as a globally relevant city.”

From MNL’s front desk in Poblacion, Maica La’O surveys the changes with a mix of skepticism and hope. “This side of town is becoming more colorful – the hipster corner of Makati,” she says, adding that some tourists now call the area “Williams-Burgos” in a wry nod to New York’s trendiest quarter.

“These little joints opened up – El Chupacabra, A’Toda Madre and Beni’s Falafel. This inexpensive part of town is where creative minds come to experiment with their concepts. Modernization is inevitable – now it’s in Ayala Avenue, Makati Avenue, and they’re developing Circuit right behind us. If it happens here, I just hope we retain the hipster feel.”