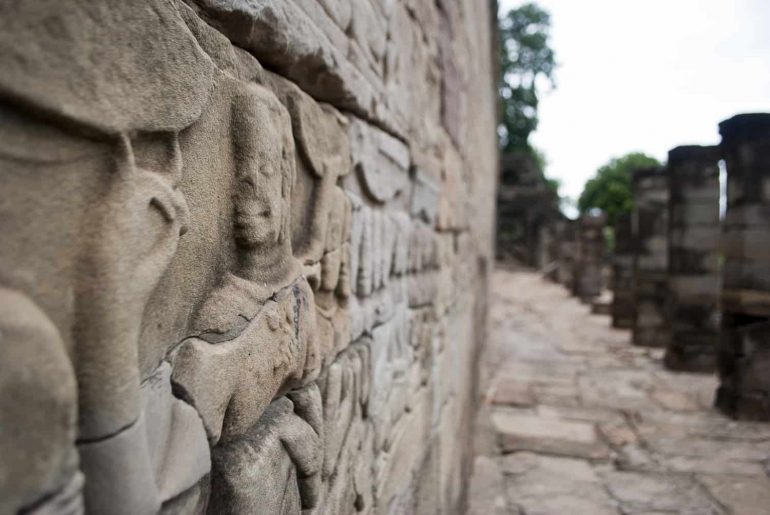 In temple-saturated Cambodia, the temple complex in Banteay Chhmar comes as a pleasant departure from the norm.

It’s isolated in a rural pocket near the Thai border – the four villages surrounding the temple complex aren’t as jaded to tourist traffic as the folk down in Siem Reap, so the Khmer culture you encounter here is as authentic as it gets.

Beyond just the bas-reliefs and the ruins of the main temple, you can also venture out to see a silk factory, satellite temples, and an artificial lake built in the days of the Khmer Rouge. Take two days to see Banteay Chhmar, and you’ll get far more out of the experience than the temple’s tumbled walls.

This is what you tolerated the three hours’ rough commute for, after all – the sprawling 12th-century temple complex built by the great Khmer king Jayavarman VII in memory of his fallen son.

After its dedication in 1216 C.E., it was all downhill for Banteay Chhmar: Thai invasions, the fall of the Khmer Empire, and the temple site’s increasing isolation from civilization ensured its erasure from history for over 700 years.

Despite thievery and natural destruction doing its worst, Banteay Chhmar retains several magnificent bas-reliefs worth visiting, including one depicting an epic battle scene between Jayavarman VII and his Champa enemies; a scene showing Jayavarman’s son battling a monster; and of course two surviving Avalokitesvara reliefs. The whole temple complex can be seen in the course of a three-hour tour.

Like its counterparts in the Angkor temple collection near Siem Reap, Banteay Chhmar was also surrounded by satellite temples, distributed in eight directions around the moat. The best-preserved – and easiest to reach – is Prasat Ta Prohm, located directly south of Banteay Chhmar.

Ta Prohm (which shares its name with a larger temple near Siem Reap) consists of a single well-preserved face-tower looming over a moat. Far from being abandoned, Ta Prohm still enjoys attention as a worship area for the locals; our guide remarked on the cloth wound around the tower, telling us that parents of sick children sometimes pray for healing here. When the child recovers, the parents tie that cloth.

A second face-tower – Samnang Tasok – is located about half a mile west of the moat, but is harder to reach, and quite impossible to access during the rainy season.

Banteay Torp, the “Fortress of the Army”

The ruined, overgrown temple called Banteay Torp takes some effort to reach – after driving four miles down the highway from Banteay Chhmar, you’ll need to ride a koyun, or tractor, three miles up a dirt road until you reach a temple complex surrounded by rice paddies.

In its heyday, Banteay Torp was a memorial/worship center for Jayavarman VII’s army. The name itself means “Fortress of the Army”; it was built at the same time as Banteay Chhmar, and was intended to commemorate the feats of the Khmer Army that managed to oust the Champa from their rule over this area.

Only three towers remain of Banteay Torp’s former magnificence; the western tower, the most easily reached, is remarkable for carved wooden supports that are as old as the rest of the tower itself.

Pol Pot Baray – A Lake with a Dark Past

It’s beautiful for travelers and useful for local villagers, but this artificial lake located three miles north from Banteay Chhmar is only here because of the genocide that took place in Cambodia throughout the 70s.

Slave labor built Pol Pot Baray. Teachers, businessmen, and government officials who had never worked a day of manual labor in their lives were trucked in from the cities and forced by the Khmer Rouge to dig the Pol Pot Baray. Needless to say, the casualty rate was staggering… but the lake, eventually, was completed.

Today, local villagers fish in the baray’s waters, and use runoff from the baray for planting rice. The birds swooping over the waters and the lotuses blooming on the surface make for a deceptively beautiful landscape, far removed from Pol Pot’s blood-soaked past.

Cambodia is still a land on the mend, with an alphabet-soup of international NGOs doing their part to help reconstruct a nation still recovering from the disastrous Khmer Rouge years. Two such NGOs – Enfants du Mekong and Espoir en Soie – have set up a silk factory along the Banteay Chhmar moat, making use of local villagers’ nimble hands and ideal local conditions for silk production.

The factory – named Soieries du Mekong – now exports expensive silk items to Europe and the U.S. Visitors to the factory can watch the silk making process from start to finish; after watching the silk being woven by hand, visitors can walk over to the silk shop to buy a scarf, pillowcase or other locally-made silk item at wholesale prices.